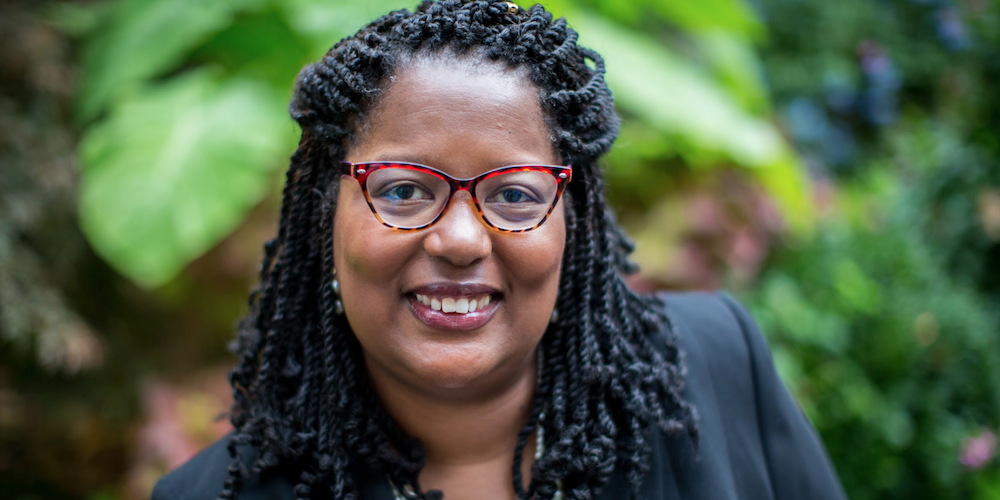 Building Legacies One Student at a Time

As a young girl and daughter of North Carolina Agriculture and Technology State University (NC A&T) graduates, she also knew she would attend college. The question was where.

“We would go to football games at A&T and I would see my parents’ friends who were also college graduates. I would go to work with my parents and see other people who were college grads,” recalled Rolanda, who grew up in Greensboro, NC. “I didn’t realize it wasn’t necessarily the norm; I just thought that that’s what you did. You grow up and go to college.”

In 10th grade this pastor’s daughter applied to North Carolina School of Science and Math, a public boarding school, just to see if she could get accepted. After passing the first round, she earned an interview on campus that changed her outlook. If boarding school was good enough for fictional friends Tootie, Jo, Blair, and Natalie from the “Facts of Life,” it was good enough for her. She accepted the challenge and moved an hour east to finish her K-12 public education.

“It crushed my parents,” Rolanda recalled. “My parents told me, ‘We only agreed to this because you said you weren’t going to go.’”

It wasn’t the last time Rolanda changed her mind about her education and her career. Now a math specialist for UnboundEd, she works to help educators build strong legacies of math excellence for their students. First, though, she had to learn her own lessons about math, race and personal power.

At first, Rolanda was excited to be around North Carolina’s “best and brightest” students, even if she was a world away from her school friends. Then, she had an epiphany. “These white kids aren’t that much smarter; they have way more experiences than a lot of my friends,” Rolanda said. “That’s when I realized ‘smartness’ isn’t something you’re necessarily born with. It’s what are your experiences and what are you exposed to as you grow up? That makes a difference with how well you do in school. It hit me when I went to that school.”

What also hit her was how race entered her educational experience in a way it hadn’t in her former Guilford County Schools in Greensboro. “Once I was in my classes there were usually one to two black kids in our class. The teachers were fine, but if teachers saw me outside of class, or if i was with a group a black people, they would walk past me like they didn’t know who I was.” Sometimes, the teachers would question why students of color ate and socialized together.

“That’s when race was magnified,” Rolanda said. “I decided I didn’t want to feel like this in college; that’s why I went to an HBCU.” She majored in electrical engineering at NC A&T, which graduates the most black engineering students in the country, and continued the legacy of her parents.

During a job fair, one of Rolanda’s professors tried to convince her to stay at the university to complete her doctorate. “He introduced me to someone who was recruiting for Delphi who also had his doctorate. After he walks away, I told the guy, ‘I’m trying to get a job, I want a Ph.D. but I can’t do it right now. I need a break.’ He said, ‘Oh, good. Let’s talk.’ I had five job offers coming out and that’s the one I ended up going with.”

With that, she started working as an algorithm engineer outside of Detroit for Delphi, a General Motors subsidiary. After a return to North Carolina, she worked as an electrical engineer at Volvo Trucks, and later a software systems engineer for Vanity Fair Corporation.

Back in her hometown, fellow church members asked for guidance for their own high school seniors in preparing for and selecting colleges. “A lot of times when they came in, it was so late in the game.” She joined her sisters in forming the Higher Learning Institute for potential first-generation college students, with a focus on middle schools.

A few years later, Rolanda’s job duties were outsourced to India while she was transferred to the training unit. The new role required more travel than she preferred with two small children and work that she didn’t choose.

“If I’m going to be training people, I would rather be making a real impact so I decided that I wanted to teach school,” Rolanda recalled. “So, I took the leap of faith and a huge pay cut and started teaching math.”

Moving from the private sector to public education was striking.

“I knew there were issues in the education system but being in it, it was like ‘Oh, there are some issues,’” Rolanda said. “I wanted to be part of the solution and not part of the problem.”

First off, she soaked up every professional development opportunity she could find. Her students learned differently than the way she was taught so something had to change. She also had to learn about the new culture of the school.

“I was used to the way business does business. Education doesn’t do business like a business does business; that was an adjustment for me,” Rolanda said. “No business is perfect, but in business, if something is not effective, somebody says, ‘Hey, we got to stop doing something or we’re no longer going to be profitable.’ I wasn’t necessarily seeing that happen in education.”

Her main thought: “OK, it’s different. What are you going to do about it?”

As part of UnboundEd’s Resident program, she is developing an “African American Male Math Achievement Toolkit,” and is testing research-based strategies with two instructional coaches in Guilford County Schools.

“In my home district, and across the country, whatever statistic you read, Black males are at the bottom,” Rolanda said. “I raised a Black male and he did great in math so I’ve always wondered, What is it? Where is the gap? Why aren’t we reaching Black boys when it comes to math?”

Rolanda is delivering eight hours of professional development to two instructional coaches spread during this school year around five equity-based practices found in the book, Impact of Identity in K-8 Mathematics.

“These practices are effective in creating equitable classrooms and I’m bringing this research in and tying it into what teachers are doing every day,” Rolanda said. First, she is working with the instructional coaches as they visit classrooms and offer feedback to teachers.

Being outside of her district offers Rolanda greater insight into her former role.

“I felt like I had a pretty strong grip on the standards before I started working with UnboundEd, but it’s so much deeper now,” Rolanda said. “I’ve definitely grown in understanding how institutional racism shows up in so many different ways, and how to have courageous conversations about race.”

At UnboundEd, “We’re trying to do revolutionary things. I like that we sit at the intersection of the standards and equity because the two have to go hand in hand,” Rolanda said. “You have people who are experts in standards. You have organizations who are experts in equity. I really like the way we combine those.”

With a son at Princeton University and a daughter still in high school, Rolanda is still set on building legacies for other children in her hometown.

“I just want it to be better,” Rolanda said. “I specifically want to see teachers doing things that invoke student learning across the board for all students, no matter their race, their socio-economic background, no matter what they bring to the table.”