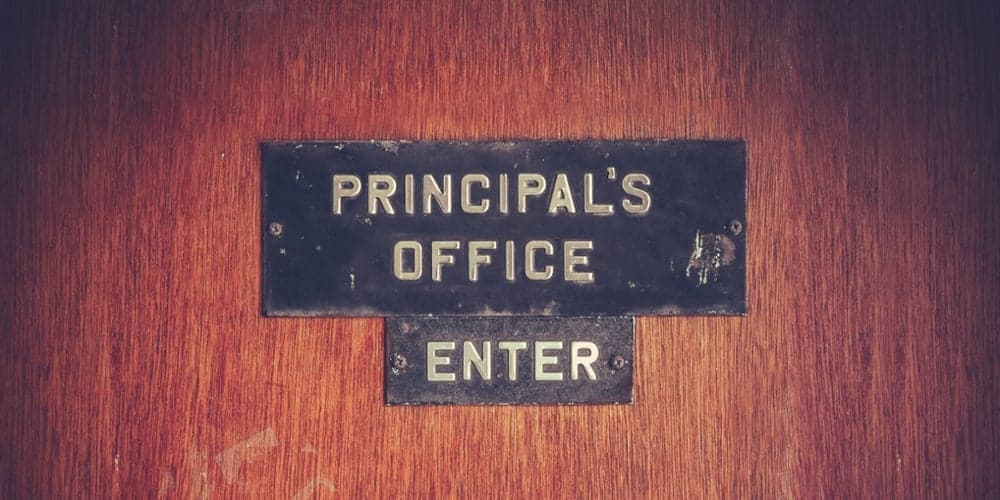 From a systemic lens, school leadership is often said to be about transformation and policy implementation, but, in actuality, it can be rooted in policing practices. Many of the practices initially offer structure and order, but when closely examined, they reinforce and recycle the foundational tenets of the school-to-prison pipeline. Here is a synopsis of my journey.

When I became a principal, I wanted the best for each of the students who walked the halls of my school. I had been sent to “transform” it, and I believed my six weeks of classroom training and yearlong residency had equipped me with the tools necessary to make the transformation being sought after by the district, parents, and community stakeholders. As I received the keys, I thought about the many changes I’d laid out in my 90-day entry plan. Implement the uniform policy, for students and staff, with two different colored shirts for the elementary and middle schoolers to easily identify when kids were in the wrong part of the building. Paint tiger paws on the floor and up the stairs in the directions the kids would walk to help maintain discipline and order. Assign kids to seats at lunch tables to keep student movement to a minimum and encourage the building of relationships with elbow partners. These practices had been observed at some of my colleagues’ schools and were important in ensuring we were able to reduce the number of out of school suspensions and office referrals as required by the district. “The kids will love this sense of order and norming,” I told myself. “This is what’s best for the kids.”

After the first quarter of the year, I took a moment to reflect on and admire the conditions and expectations that my leadership team and I had created. We were implementing the strategies! I was celebrated for a double-digit decrease in office referrals and academic gains every quarter. At the same time, I didn’t see the expected increase in the students’ sense of pride or belonging. Kids begrudgingly followed the mandates for the most part, but I didn’t understand why there remained a lackluster appreciation for the new school environment we had created. That all changed when I talked with a fellow principal about my concerns and he shared research about the “School-to-Prison” pipeline with me. I was incredulous upon learning about this way of pushing school policies that reflected the practices of our incarceration system; then, I had to pause and look at my own school.

I was mortified when I became fully aware of how our new policies were reinforcing the very system I was working against. I was perpetuating the Pipeline by requiring uniform attire, only instead of jail-bright orange, ours were shades of blue; requiring everyone to walk in a straight line, just like the penal system; and providing wall-facing desks in time out corners, which were intended to be a calming mechanism, but was, in fact, a form of social isolation designed in prison for offenders who refused to follow the rules, only my offenders were as young as five and sent to “the hole” for not answering when called upon.

Learning about the School-to-Prison pipeline put me on the balcony. In The Practice of Adaptive Leadership, Ronald Heifetz refers to this process as “diagnosing the system.” I had to take a moment away from the daily grind to see the bigger picture and get a better understanding of the district’s policies and structures that were, unbeknownst to me initially, directly impacting the culture of my school. At UnboundEd, we firmly believe that “Justice is found in the details of teaching and learning” (™). I was disheartened by some of the details that emerged, based on my new perspective.

I began to see ways in which kids were being further marginalized by some of the “inclusive ideas” we developed. One example that readily comes to mind was the implementation of a monthly “Dress Down Friday.”  In the first month of school, I met with the 8th grade class to get a pulse on how my leadership was being received. I heard loud and clear that the students did not like the uniform policy and desired a form of expression; they wanted an opportunity to come to school in regular attire. Parents had committed to and paid for blue shirts and khaki pants, which I believed would help kids who were impoverished be less at risk for bullying because of their lack of “cool clothes.” But I realized these same kids wanted freedom. After a lot of discussion with the leadership team, I proposed a once per month school-wide Dress Down Day for a $1.00 fee for students and $5.00 for staff who wished to come out of uniform. The proceeds were going to pay for the 8th grade bus trip to New York, extending the learning from their Harlem Renaissance study.

Surely, this was a win-win situation.

The data showed attendance rate on the last Friday of the three months observed was slightly lower than other Fridays and office referrals slightly increased on the Dress Down Days, but not for the reasons I had expected. Through conversations with parents and students, I realized the fee, though only one dollar, was difficult for some of my students to pay. This caused students to stay home or skip school. Additionally, students in uniform who came to school tended to get into confrontations with students out of uniform on these days. By stepping up onto the balcony and surveying the entire impact of the Dress Down Day policy, I realized I was further exacerbating the very inequities and discriminatory practices I was hoping to eliminate.

As school leaders, we must intentionally delve into a root cause analysis of why we do what we do, and we must own what we learn. This brings to mind another timely phrase that echoes at UnboundEd, which is owed to the late American poet, Dr. Maya Angelou: “Know more, do better.” I could have attempted to blame my team for not being able to see these issues. I could have blamed the district for the aforementioned policies, but the onus was on me.

I pulled my leadership team together again to design a pathway to action. We removed the student fee and replaced it with Tiger Bucks and a comprehensive incentive program. These fictional but fabulous dollars sometimes outpriced gold in their value. Students nominated items for the school store, Dress Down Day could be purchased with Tiger Bucks, which all students could earn through improved attendance, academics, and behavior. Was the Tiger Buck incentive system perfect? No. Was it an improvement on the prior practices? Definitely. Through the lens of adaptive leadership, I worked with my team to tackle the tough problems and challenges we faced within the community we served. Sometimes we got it right. Too often, we didn’t.

According to the district, we made incredible strides that year. Attendance and academics increased. Suspensions decreased. Staff and parent satisfaction surveys were the highest the school had ever received. While I was proud of these accomplishments, my heart still aches when I think back to what it cost to achieve them. My team and I tried to learn from and build on our past mistakes every day instead of denying them. We learned to extend grace to each other and to ourselves and to realize that we were doing all we knew how to do and adapting along the way. When we knew more, we did better for the sake of the kids in our care, so they’d have a better opportunity to reach their fullest potential. Despite the intent of our school district’s educational practices and policies, the impact of implementing them upon the kids I was sent to serve still haunts me years later.

I hope by transparently sharing a snippet of my journey as a school leader, adults who oversee the daily discretionary spaces of kids may more clearly realize the power and privilege they hold, as well as the responsibility to look at all sides of the situations they encounter. There is always more to know. There is always better to do.

A career educator, Andrea Hancock has served in several capacities within the district where she was educated during her formative years: Baltimore City Public Schools. Andrea worked as elementary school teacher, instructional coach, principal, network lead and Instructional Leadership Executive Director charged with supervising principals across a network of PreK-8 schools. Andrea transitioned from the district to lead the Baltimore division of the Emerging Leaders Program at New Leaders, and served as an Advisor for the Transforming Teams program. Currently, Andrea is the Deputy Chief Academic Officer at UnboundEd, contributing to thought leadership while managing external partnerships and supporting the ELA and math teams’ development of content work across program areas. Andrea holds a Masters of Arts in Education from University of Maryland, Baltimore County.