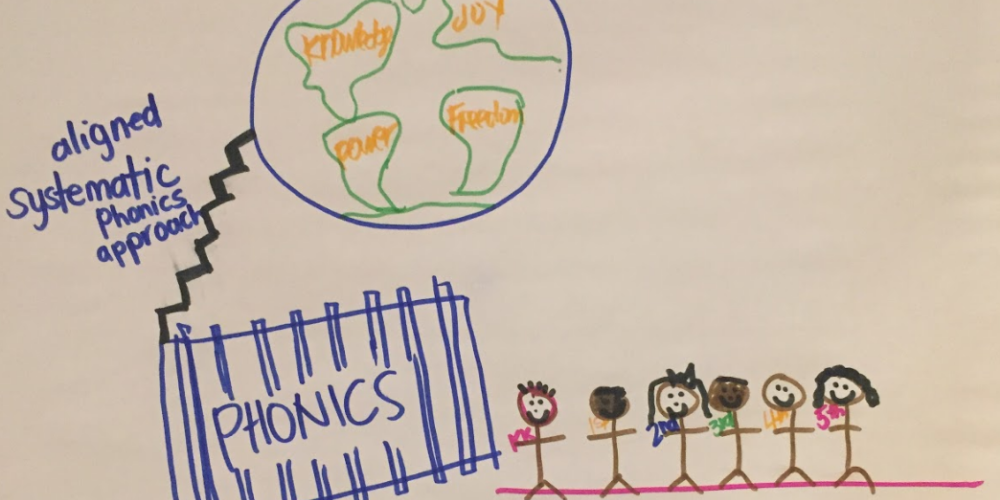 The revolution in Shelby County classrooms will be led by teachers.

“If I close my eyes and envision a successful district, it’s teacher-led,” said LeAndrea Taylor, a lifelong Memphis elementary teacher turned literacy director. “Teacher leadership is the key and here in Shelby County, we’re working to ensure whatever I know becomes a part of the fabric of the schools.”

Born and raised in Memphis, LeAndrea sees the schools in Shelby County as her schools. This is family. These are neighbors. She embraces her responsibility to be a support outside of the classroom to teachers inside of it. “We are building up schools person by person so that the teachers have ownership.”

After 11 years of teaching pre-K, 1st, 3rd and 4th grades, LeAndrea noticed a change in how policymakers were discussing expectations for student learning across the country. There were inequities for children in different states and cities.

“I saw it happening in other states and hearing people articulate this idea of how students were getting a different education based on where they live–that part of the conversation caught my attention.”

She wanted students in the greater Memphis area, a city founded 200 years ago and named after the ancient capital of Egypt, to be just as prepared for college and career as any other students in America. First, she had to become a student herself.

“I had to understand the level of rigor, the staircase of complexity in K-5 where I was working and making sure I was well-versed,” LeAndrea said. “We had to flip their thinking and ours of what good teaching was. We hadn’t taught like this–having students engage in discourse.”

Like some other states, Tennessee tailored the Common Core standards to align with its priorities. Teachers were expected to shift their paradigm of teaching and learning.

“A part of the challenge is at first we weren’t taking aligned tests and teachers were being judged and were hesitant to make that shift,” she said.

“In a city like Memphis, schools were being shut down if scores weren’t going up and we were trying to keep our jobs,” she explained. “What we had to prove is that this kind of teaching is what’s going to help all students get there. It took buy-in and showing when students learn this way they’ll be prepared.”

LeAndrea has been part of the Shelby County Schools’ huge focus on early learning, helping K-2 teachers understand foundational literacy and skills. “They’ve learned it’s easier to catch the gaps when they’re small,” she added. After implementing an aligned curriculum at the elementary and middle school levels in 2017-18, students have shown gains in literacy.

“Our students are being introduced to complex text that’s engaging and when teachers get it right, they’re thinking critically and forced to think about the world and the impact they have,” LeAndrea said.

This shift in teaching provides opportunities for students to talk and write more, allowing them to improve their vocabulary and understand their place in the world.

“It’s a beautiful thing to see students talking about human rights treaties and being able to compare that to current times where they’re being treated unfairly,” she said.

These shifts take work. “We’re going to schools, having conversations around text and making teachers write to the task they’re assigning students,” LeAndrea said. “Once they engage in the task, they can see the supports necessary.” Going into the trenches and doing the work with teachers is making a difference in the largest district in Tennessee.

“Embracing the standards has to led us to a more open conversation about equity,” LeAndrea said. “We knew what was wrong, but we didn’t have an avenue to close the achievement gap. The standards provided clarity around what students should do.”

This goes beyond compliance, LeAndrea believes. “We’re going deeper to explain the ‘why’ and the purpose behind what we’re doing, then focusing on ‘how.’”

“Building teacher capacity to lead this fight and know when we show up every day in schools we’re ready to identify bias that needs to be eradicated–that’s where the power is.”

LeAndrea Taylor currently serves as an iZone Instructional Facilitator in Shelby County Schools. The iZone is a nationally recognized school reform model celebrated for its approach to turning around the bottom 5% of schools in the metro Memphis area.  Prior to serving as an instructional coach, she taught elementary school. LeAndrea was at the forefront of the standards movement in the state of TN and worked as a trainer for the TN Department of Education to prepare teachers across the state to implement instruction aligned to CCRS standards.